Today’s post is a very special one because of how excited I am about FOUL IS FAIR sso I want to yell about it to anyone and everyone who wants to listen. I was extremely pumped for FOUL IS FAIR the minute it was announced but then, I read the first two chapters and fell head over heels for it, these two chapters are the kind that pull you into the story immediately and set the mood for the novel right off the bat. And that mood is rage, revenge, dark and stabby, and I’M HERE FOR IT!

The cover was revealed on Wednesday (May 22th) and it’s? SO GOOD! Jade with her short hair! And dark eyes! The colors! The blood stains (?)! As if I needed even more reasons to be excited about it and YET, here we are, Foul is Fair looks like it’s going to be the full package. You can find the cover reveal here, and take a look at that stabtastic cover a little further down in the post.

Fret not, I didn’t write this post today just to be a useless tease, I’m actually bringing some exclusive content with me, the same TWO CHAPTERS that made me hooked to this book and want to real all of it right now, so without further ado, here they are:

Sweet sixteen is when the claws come out.

We’re all flash tonight. Jenny and Summer and Mads and me. Vodka and heels we could never quite walk in before, but tonight we can. Short skirts—the shortest. Glitter and highlight. Matte and shine. Long hair and whitest-white teeth.

I’ve never been blond before but tonight my hair is platinum. Mads bleached it too fast but I don’t care because tonight’s the only night that matters. And my eyes are jade-green tonight instead of brown, and Summer swears the contacts Jenny bought are going to melt into my eyes and I’ll never see again, but I don’t care about that, either.

Tonight Jenny and Summer and Mads and me, we’re four sirens, like the ones in those stories. The ones who sing and make men die.

We smile at the door. They let us in. Our teeth flash. Our claws glimmer. Mads laughs so shrill-bright it’s almost a scream. Everyone looks. We all grab hands and laugh together and then everyone, every charmed St Andrew’s Prepper is cheering for us and I know they see it—

for just a second—

—our fangs and our claws.

The first thing I do is cut my hair.

But it isn’t like in the movies, those crying girls with mascara streaks and kindergarten safety scissors, pink and dull, looking into toothpaste specks on medicine cabinet mirrors.

I wash my makeup off first. I use the remover I stole from Summer, oily Clinique in a clear bottle with a green cap. Three minutes later I’m fresh-faced, wholesome, girl-next-door, and you’d almost never know my lips are still poison when I look the way a good girl is supposed to look instead of like that little whore with the jade-green eyes.

Then I take the knife, the good long knife from the wedding silver my sister hid in the attic so she wouldn’t have to think about the stupid man who never deserved her anyway. The marriage was a joke but the knife is perfectly, wickedly beautiful: silver from handle to blade and so sharp you bleed a little just looking at it. No one had ever touched it until I did, and when I opened the box and lifted the knife off the dark red velvet, I could see one slice of my reflection looking back from the blade, and I smiled.

I pull my hair tight, the long hair that’s been mine since those endless backyard days with Jenny and Summer and Mads. Always black, until Mads bleached it too fast, but splintering platinum blond for the St Andrew’s party on my sweet sixteen. Ghost-bright hair from Mads and jade-green eyes from Jenny and contour from Summer, almost magic, sculpting me into a brand-new girl for a brand-new year.

My hair is thick, but I’ve never been one to flinch.

I stare myself straight in the eyes and slash once—

And that’s it. Short hair.

I dye it back to black, darker than before, with the cheap box dye I made Jenny steal from the drugstore. Mads revved her Mustang, crooked across two parking spots at three in the morning, and I said:

Get me a color that knows what the fuck it’s doing.

Jenny ran back out barefoot in her baby-pink baby-doll dress and flung herself into the back seat across Summer’s lap, and Mads was out of the lot and onto the road, singing through six red lights, and everything was still slow and foggy and almost like a dream, but when Jenny threw the box onto my knees I could see it diamond-clear. Hard black Cleopatra bangs on the front and the label, spelled out plain: #010112 REVENGE. So I said it out loud:

And Mads gunned the engine harder and Summer and Jenny shrieked war-cries from the back seat and they grabbed my hand, all three of them, and we clung together so tight I could feel blood under my broken claws.

So in the bathroom, an hour later and alone, I dye my hair revenge-black, and I feel dark wings growing out of my back, and I smile into the mirror at the girl with ink-stained fingers and a silver sword.

Then I cut my broken nails to the quick.

Then I go to bed.

In the morning I put on my darkest lipstick before it’s even breakfast time, and I go to Nailed It with a coffee so hot it burns my throat. The beautiful old lady with the crooked smile gives me new nails as long as the ones they broke off last night, and stronger.

She looks at the bruises on my neck and the scratches across my face, but she doesn’t say anything.

So I point at my hair, and I say, This color. Know what it’s called?

She shakes her head: No.

She says, Good girl. Kill him. 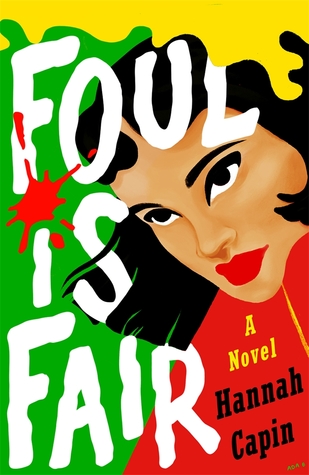 Synopsis: Elle, along with her friends Jenny, Mads, and Summer are the queens of their school. Untouchable, they have the kind of power that others only dream about. No party is closed to them, and the world is at their feet. Until the night of Elle’s birthday, when they crash a St. Andrew’s Prep party, and her life changes.

The lacrosse boys went after the wrong girl.

Elle enrolls at St. Andrew’s Prep as Jade, with revenge on her mind: with the help of her coven, they’ll take down each boy, one by one. They’ll lose their power, and their lives, as the coven destroys the social structure of the school. Elle and her friends will make sure these boys can never go after a girl again, and they have a perfect way in: a boy named Macbeth, whose ambitions could turn deadly.

Foul is Fair is a bloody, thrilling revenge fantasy for the girls who’ve had enough. The boys better watch out, for something wicked this way comes.

Check out the trigger warnings here.

Preorder Foul is Fair – Add it on Goodreads

Hannah Capin wrote her first “novel” when she was 11. It starred a girl detective and a brilliant villain seeking revenge on her enemies in the FBI.

Hannah Capin wrote her first “novel” when she was 11. It starred a girl detective and a brilliant villain seeking revenge on her enemies in the FBI.

Thousands of pages later, she’s still writing about smart girls and vengeance. THE DEAD QUEENS CLUB is out now and FOUL IS FAIR comes out in february 2020 from Wednesday Books.

When she isn’t working on her next manuscript, you can find her sailing, singing, or scheming with her friends. she holds degrees from Columbia University and the Indiana University Jacobs School of Music, and she lives in tidewater Virginia.